As the 6th month approached I realized that I had some hot gigs on the burner, so I put off my recap until after the April Fool’s service.  Then I waited until I had something to report about the Spring Break Clown Camp… Pretty soon it was Summer Clown Camp, and then it was National Clown Week.  That’s when I found out that all of her sites had been hacked and she was not able to do the follow-up article after all.

Now it’s been 14 months since the first article.  Here are the updates I was going to share with Becky Cortino.

In “Launch”, Michael Stelzner emphasized the power and necessity of collaboration, and his examples and suggestions helped me focus on a better collaboration strategy.  Per the suggestions in “Launch”, I have continued to seek out and involve Other Great People and “exchanging offerings” with them.  Notably, I actively recruited successful peers and industry experts to visit the local clown alley, the Red Nose Brigade.  I convinced Guinness World Record Winner, Alex “the Zaniac” Zerbe, to give a skill share workshop.  He later called me needing a pie-in-the-face consultation for a regional library promo video he was shooting.

Each year around Halloween I spend time working with the scary clown stereotype instead of against it.  I did three consecutive years at the Tumwater Halloween House.  On the third year the owner also accepted a pie-in-the-face, and I inaugurated a scarier look complete with prosthetic teeth.

In 2011, I negotiated with several non-profits for an 11 night run as a scary clown in a Haunted Firehouse.  In addition to cash and logo placement on the flier, one perk was a pair of season tickets to a local theater.

I sponsored a successful 10 week “First of May” internship with an Evergreen State College student, who studied clowning through a Marxist feminist lens.  This gave me a chance to reflect on suitable reading and viewing lists.  Books included: “Pie any means necessary” (the Biotic Baking Brigade), “Clown Girl” (Drake), and “the Death of Ben Linder” (Kruckewitt).  I shared videos ranging from Danny Kaye in “The Court Jester” to Chaplin’s “the Circus” to the inner city Krumpin’ Clowns of “Rize” and the spacey clowns of Cirque du Soleil.  She accompanied me on a variety of gigs: a parade, a birthday, a drive-by pieing, several workshops and spring break clown camp.  I introduced her to a half-dozen members of the local clown community, and she interviewed them for a wider perspective on the craft.

My Laughter Yoga practice has also grown beyond the free weekly club meeting at the Olympia Unitarian Universalist Congregation (OUUC).  A PE teacher from Elma hired me to give a lecture-demo for her school’s staff meeting, and the Olympia Occupy Solidarity Social Forum invited me to give two workshops.

Since April Fool’s fell on a Sunday this year, I coordinated with the minister, worship arts committee, and eight clown confederates on a church service around the theme of “How Humor Serves the Soul”.  I led a Laughter Greeting & Laughter Meditation portion.

Several Sundays later I led a church service at the OUUC on the topic of “Laughter: opens minds, fills hearts, and transforms lives” partnered with another Certified Laughter Yoga Leader.  We made the connection between the church’s mission statement and the use of laughter as a tool to achieve those goals.  After the service I was approached by a man from a smaller church to the south.  They don’t currently have a minister and they share the responsibility for a weekly message.  His official title may be President of the Board, but he was actually also a talent scout.  He offered to hire me to do a service for them. 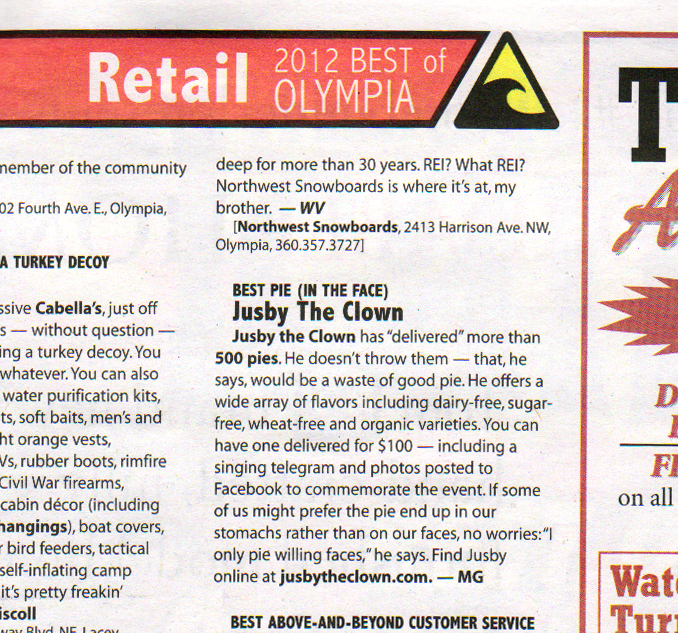 I was the “2011 Best of Olympia” Staff Pick in Tacoma’s Weekly Volcano for “Best Pie (in the face)”.

I also got good publicity by offering a free class in “Esoteric Red Nose Clowning” at Waves, a local dance studio, as part of their Community Event Nights.  A reporter from Olympia Power & Light attended, and his article made the front page.

I hosted a spring and a summer Clown Camp.  I taught a total of eleven students, and I was able to bring in five additional part-time counselors.  The larger success, however, wasn’t the number of students who actually enrolled, but the scope of the advertising I was able to achieve by partnering with the Parks & Recreation department.   They published several photos with the camp description in their catalog that went to thousands and thousands of locations.  The school districts allowed me to send fliers home to students because the parks department is a non-profit organization.  After the spring camp I decided to upgrade my flier and made a deal with local illustrator, Chelsea Baker.  She stays busy drawing a 4 panel comic every day.  It was the best advertising investment I’ve ever made.

It was my 3rd year pieing at Festival of Purim and 2nd with a large entourage of clowns.  The rabbi was on sabbatical, but I’ve already pied him twice.  This year I stayed for the whole megillah.

It’s come down to a “Go Big or Go Home” mentality.  Technically, it’s a “Go Big and THEN Go Home” thing.  If other clowns sometimes offer a 2nd clown, I like to offer half a dozen.  I like to arrange a multi-clown team to accommodate the balloons, Laughter Yoga, singing, dancing, and piñata bashing.  Clown OVERKILL is really my favorite thing.  It’s especially efficient when we’re doing one-on-one activities like face painting and balloon twisting.

Some clowns work in pairs.  I like to roll about 5 deep whenever possible.  I keep a clown in every corner and one in center stage.  Guess who gets center stage.