Charlie “The Noise Guy” Williams (of Isaaquah) capped off the Summer Children’s Entertainment Series on Tuesday night.  Capped it right off. bang-bang-bang. ke-BaaaNGGG!

Okay, kids.   You can only make these sounds OUTSIDE, okay?  Have a fun car ride home, parents. 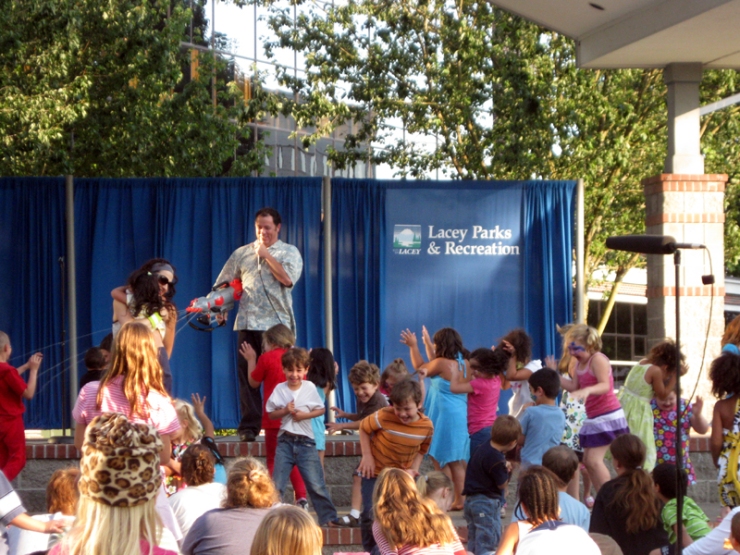 Blasting the kiddy mosh pit with a Super Soaker to illustrate the effects of Hurricane Charlie. 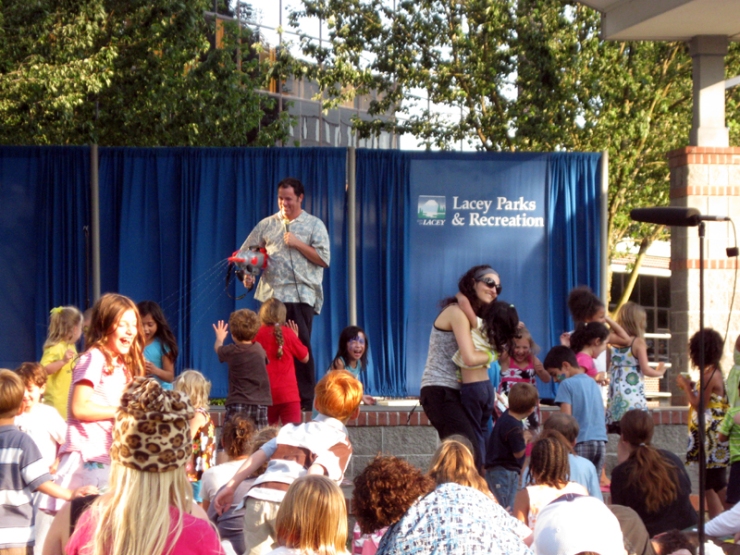 And a third volley because they screamed “More, more, you fool!  We must be subdued by your hydraulic arsenal or we will rush the stage!” 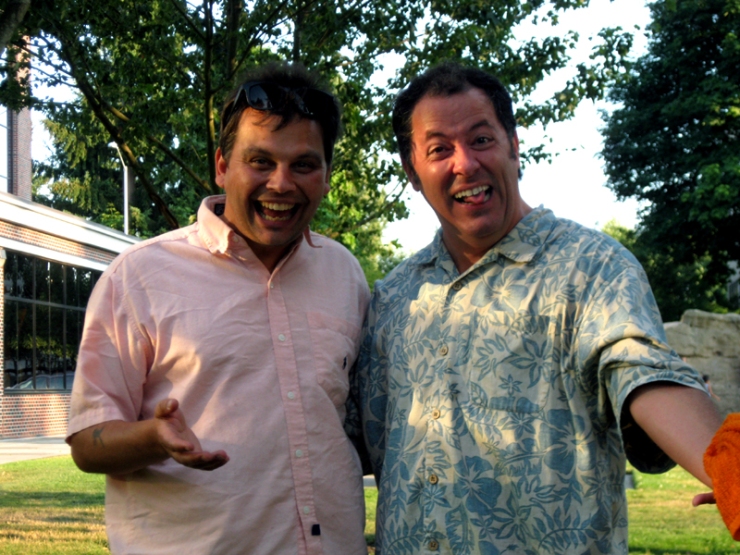 What a pretty face!  It almost seems a shame to cover it in pie.  Almost.

We arranged to meet on Thursday morning before Charlie’s next Olympia show (at the downtown library).  We had a blast comparing stories and riffing on each others’ material.  We’ had a delicious breakfast at the New Moon Cafe (Vampire themed vegan breakfasts – j/k). He ordered French Toast.  I ordered the Monte Cristo… which is a triple-decker French toast club sandwich.  I brought a Buy Local coupon.  He brought a credit card.  Breakfast was on him! 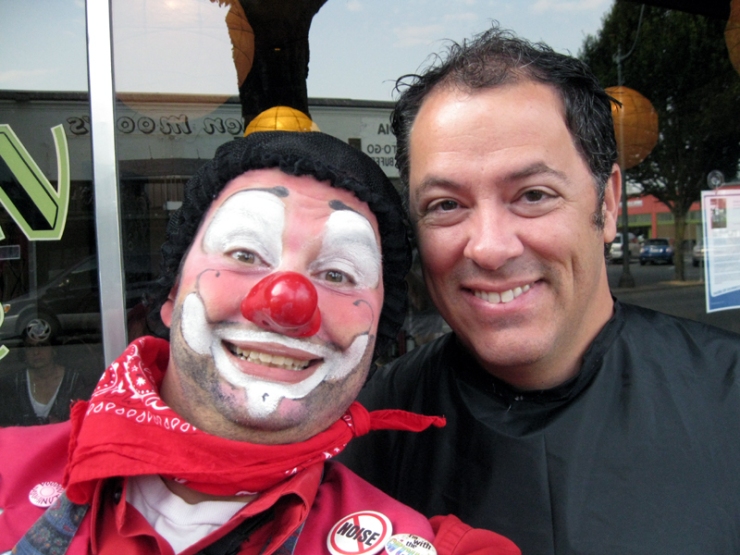 Charlie’s modeling the new Magnum salon cape that replaced the backwards lab coat for pieing.  He’s always wanted a pie-in-the-face.  It was fate that brought us together.  Fate and FACEBOOK. 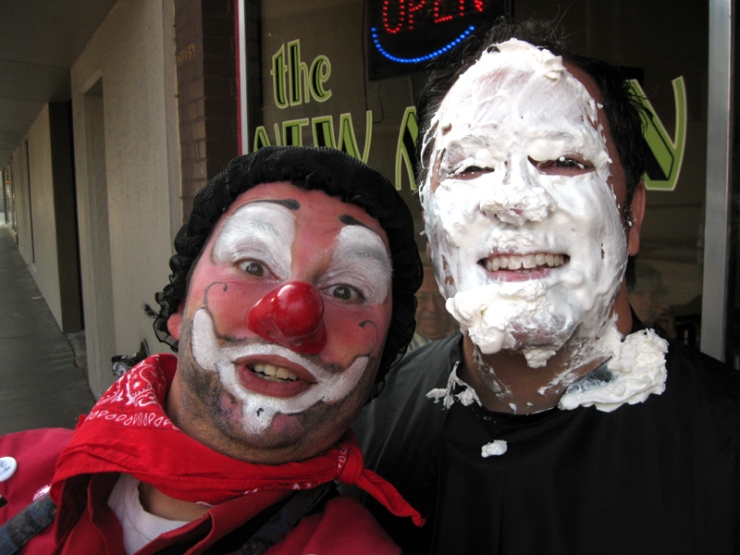 Desert was on him too!

No skimping on the pie!  If you look closely you’ll see Terry Zander, former piee, peering at us from inside.  Also seen in the New Moon that morning, former client, Debe Edden. 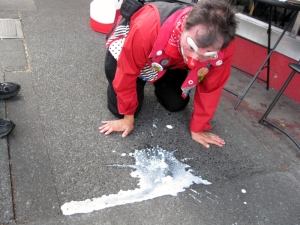 Ooops.  Somebody’s gonna have to clean that up!  Out came Terry Zander to the rescue with several buckets of water and an industrial push broom.  The catch?  I had to listen to his jokes. 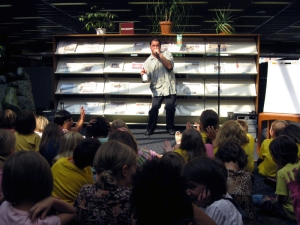 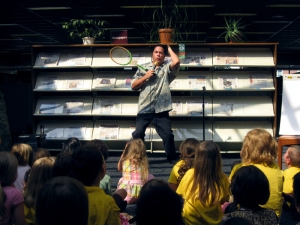 What IS that racket? 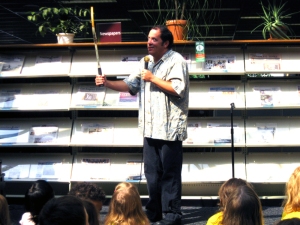 It’s your new light saber on the first day of Jedi School.  Good thing Master Yoda had that tip about the AA batteries. 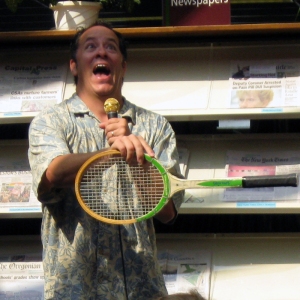 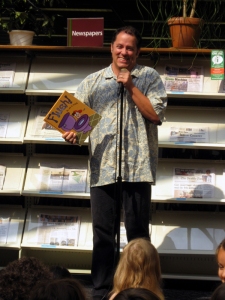 Charlie wrote a book: “Flush, an Ode to Toilets”.

OMG, I Pied ANOTHER AUTHOR!

I’m am the literariest clown in the whole reciprocating bio-region of Cascadia!

Charlie’s review of the Pieing

Out of the choices: Strongly Agree, Agree, Disagree, Strongly Disagree or Not Applicable

He also added the following comments: “Pied Piper, Pied lovebird, Pie in the sky, the great pie of Sauron”