Pied in Memphis, in her own back yard… celebrating her M.F.A in Creative Writing Degree!

Another Author Pied!  I’ve got such educated and talented clients!

Yes, she is also a chef.  She served us such wonderful treats during our Memphis stay.  For example: Bacon and Basil Salmon with Grits followed by a Scotch & pear liqueur over French vanilla ice cream. 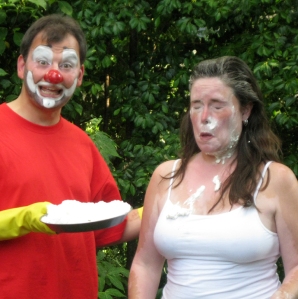 The monthly book club was to discuss Mary Akers collection of short stories Women Up On Blocks.  Wendy had let us know about the club meeting at the beginning of our week together, and I took the opportunity to give the book a try.    Wendy loved it.  She gave it 5 stars on Amazon.  All 11 Amazon reviewers agreed: 5 STAR BOOK.

I only finished the first two stories.  Only one other person of the 10 at the club had, in fact, read the book.  A lively, if theoretical, discussion ensued.  I’d been intrigued by “Animo, Anima, Animus” the story of the woman who paints herself  like a tiger and protests animal cruelty in a cage outside the circus.   It was stimulating on several levels.  However, I did notice the pattern that the other two readers mentioned: the women in these stories don’t progress.  We’re left hanging and frustrated.

The other big critique we heard was “I didn’t learn anything from her voice.”  Many of the characters are low rent Appalachians, and, as Southerners, this affluent and educated group didn’t quite buy it.  Well, yeah, sadly, the majority didn’t bother to buy the book though they could obviously afford it.  [granted, there were mitigating circumstances, slight miscommunication, parental obligations, Summer ennui, the WORLD CUP!]

Then they took suggestions for next month’s book.  Two people suggested the classic novel “Cry, the beloved Country” [set in South Africa], one suggested a new non-fiction hardcover “Cognitive Surplus”, and…

Clown Girl, by Monica Drake, a Portland author, I’ve had the pleasure to meet… and pie.  Her husband is an author, and I pied him too.  She brought two other author friends.  I pied them all.

For a slightly lighter fare (than apartheid-era South Africa), this is the story of a clown who wants to raise her clowning to a higher art form by developing a clown version of Kafka’s Metamorphosis, but she finds that what sells is either Christian balloon sculptures… or private adult parties for clown fetishists.  Clown prostitution, in other words.  For a good time, Clown Girl by Monica Drake.

I thoroughly enjoyed the company of sophisticated adults engaged in friendly debate.  Not a passionate argument, not a political or religious shouting match, but a literary critique.  Refreshing.  Because they were digitally sophisticated, they were able to look up Clown Girl on an iphone and noticed it had a flattering forward by Chuck Palahniuk, but in the end they voted for “Cry, the Beloved Country”, and so I don’t have to host the club in August.

But they were prepared to either fly me back out or Skype me in.

Try also, the Red Stiletto, invented by mixologist Kate DiMaggio in honor of Women Up On Blocks!

1 thought on “Pieing the Chef and Author, Wendy Sumner-Winter”