I got a call during lunch on Friday from Jon,  of AmericanSingingTelegrams.com asking if I was available Saturday.  The client was an active duty serviceman serving in Iraq who wanted to wish his mom a happy mother’s day. 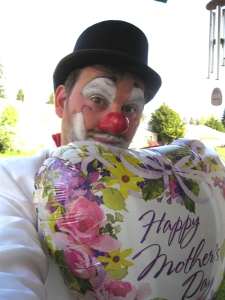 The last time Jon called he had been looking for a guy in a gorilla suit, and this time he was asking after Elvis.

“I’ve got a train conductor… secret agent… doctor… uh… ”  Why does he keep asking for these redonkulous things!?

Well, it’s because these are what John Q. Public from Anytown, USA wants in a singing telegram, and these are the costumes listed and pictured on their website. >Note the position of ‘CLOWN’

We settled on the Tuxedo and Top Hat.  I told him that it was a white tux with tails and had primary color buttons: a clown tux, you know.  As it got closer I started to wonder whether I was even supposed to be a clown.  Then I knew that I couldn’t wear a clown tux, act like a clown, and sing like a clown without wearing a clown nose.

It would dilute my brand to do anything but show up as Jusby… and give the mom her telegram on Jusby stationary… and sing Jusby’s signature song.

So that’s what I did… wearing a tux jacket with shorts… gave her a HUGE bouquet in a vase, a balloon hat, and four helium balloons.   Great gig! 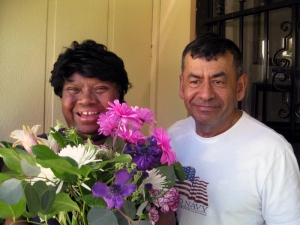 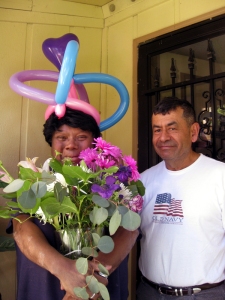 The mom was naturally moved to tears by my customized serenade. The dad puddled up too. Or was it allergies?