Friday morning I considered showing up at the Grand Opening of the new Olympia Trader Joe’s with a cooler full of pies. 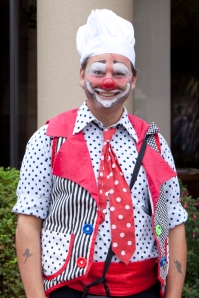 photo by James West, President of the Olympia Camera Club

I’m glad I didn’t.  People were there by the hundreds… TO SHOP!  All the suits from the Chamber of Commerce were there, and all the managerial types from TJ’s were beaming with pride as the cash registers rang out the sweet song of PROFITS! 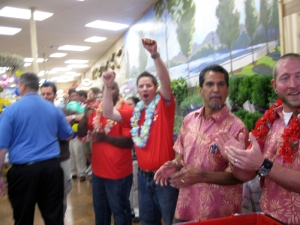 We left Trader Joe’s with a free recycled tote bag, but no groceries.  Payday wasn’t for another 10 days.  We went into Barnes & Noble’s and browsed for an hour, and I made an inquiry about being a Guest Reader on their stage (for Free).  I also introduced myself to guy with one of the full bags of Grand Opening treats.  He said he was a VIP because he’s opening a store in Renton.  I gave him my card.  A few minutes later he asked that I give his wife a second one.  Good thinking, Mister.

Then I got prepared for an event to which I was actually invited, a year end BBQ for the Thurston Parks Summer Camp.  Sarah Alexander had finally agreed to be pied.  She figured it would go over great in front of the kids, and I could even bring mine.  She even estimated that I might find up to EIGHT willing faces including her own.  Although it would be another volunteer gig I considered it a better publicity stunt and a safe, appropriate surprise that would be a profoundly memorable way to celebrate.

Orion and I arrived and were greeted with, “Can I help you?”

Uh-oh. A grumpy looking lady wearing official parks gear.  It turns out that Sarah was not the boss of this institution, nor did the bosses know I was coming.  The grumpy lady says, “This is a closed site.  All of the guests have to go through us.  We have special needs campers.” Etc. Etc. and Wait Here.  So I shoot the breeze with some other ladies.  One has already had a pie-in-the-face.  It was one of the three things she wanted to do before she died.  She’s probably not going to do the other two: drive backwards into town or drive around town with a bag on her head.

Okay, the wait is over.  Another guy shows up with parks gear and asks, “Can I talk to you over here for a minute?”

Uh-oh.  The brush off. He tells the same story, so we leave.

Then I head down to Sand in the City.  After all, I don’t have room in the freezer for all this whipped topping.  A clown and his pie are soon parted, eh?

I found my first customers near the tower, but I attract the attention of grumpy looking ladies wearing official Hands On Children’s Museum gear.  “This is supposed to be a fund raiser for US.”  So they direct me to the edge of the festivities, and I lead away a group of children who have already lined up for their pie, one of which is the daughter of grumpy lady #2.

I’m the Pie Piper… or is it the Get-Pied Piper?

At this point ANOTHER grumpy looking lady comes over.  She wants to know if these pictures will be on the internet.  She would prefer that a couple of them NOT be on the internet… at least with the names attached… actually could I please just delete it from the camera?  Okay, I show her the shots and delete the first one, but then she can’t really identify the faces with all the whipped cream, so she says “It’s really fine.  Never mind.”

This last face barely got annointed, but I’m gonna count it, okay?

New total: About 230 Faces Pied!  None of them GRUMPY

That evening I talk with Sarah.  No one told her that I’d shown up and been sent away.  She thought I blew her off.  She HAD asked permission from her supervisor.  We both think they owe me an apology and paid gig.  Don’t you?