We arrived at Camp Seymour in time for lunch on Saturday. I checked the talent show sign-up and added my name.

As more people added their names I kept returning to cross mine off and add it lower down the list.

That night when I showed up in costume, John, the MC, recognized me from the Halloween House. Several other people had added their names, but John allowed me to move again. Then he announced me as “the Headliner for our Finale!”

I had been meaning to work in the identical bucket gag since June. One bucket has water, one has confetti. I had worked as a counselor at Camp Invention. I was the instructor for the Solve-It module. At the end of the week, word came from corporate HQ: “We don’t want ANY of those supplies back.” Hence, I left with two identical blue plastic buckets perfect for the gag.

How I made it work for me: in the dining hall, the audience sat in two rows of angled cafeteria tables. I found a workable blind spot behind a piller down stage right, near the exit door. I had spongy juggling balls for the set up. I brought them out and squeezed the water out of one. I did a juggle and put them away as “too messy and dangerous” wiping my hands on my pants. As a bonus I made an aside, “That’s a set-up for later”.

When a girl, the Carrie Underwood fan, called out exposing my 5 ball routine as a fraud I went to the other bucket and doused her in confetti. She got me back in the end reusing the confetti on me as I made balloon kitties. Then she asked me to make HER a hat. I pumped up the 1st balloon. She said, “I don’t like pink.”

I whipped up an atrocious facsimile of a hat for her in blue and green. But I skip ahead.

I started the act by drawing attention to the teenagers playing Magic in the back with a quick lesson in the social rules of a performance.

For instance, you’re supposed to look toward the front and applaud and/or laugh when you see something funny. Then I had everybody practice various claps and laughs. Like a monkey, like a mime, like Scooby Doo, etc.

After a variety of laughs I switched to juggling the wet balls with the preface, “When my lovely wife, Trish, bless her heart, first told me about UU she said it was a pretty intellectual church, so this is probably a good trick: wet juggling balls, etc.” Then I switched to the 3, 4, and 5 ball trick. “I’ve been juggling 3 balls for over twenty years, but I realized that I needed to do more…” (then I palm the extra balls and continue juggling 3).

Orion began interrupting me. He brought me a pump and a balloon. “Daddy, can you blow up this red balloon and make me a sword?”

“Oh, yeah, but I can’t make a sword. We don’t do weapons here…” into the gag about the first balloon animals.

“Did you know that the first balloon animals were originally the intestines of sacrificed animals that were twisted into an animal shape and then sacrificed again, so this has been funny for thousands of years.” I let the balloon shoot off into the crowd. I let a 2nd balloon make whiny and/or farty noises.

“Funny for thousands of years.”

Then more juggling. A quiz about the mini Soccer ball, Football, Baseball, Basketball… what’s the big game at the end of year for this one? this one? etc. It should be: World Cup, Super Bowl, World Series, and… no good name for basketball’s big game (toss it over my shoulder). So we’ve got Cup, Bowl and Home Plate. Set the table! I usually try to work in the word Tri-athelete too.

Then I go to What’s in the Bag?

“It’s a weapon.” and I finish with the Indonesian Fighting Fan routine. This time it had major interruptions by Orion to everyone’s delight. 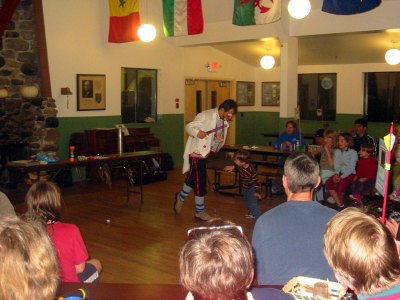