I received the following instructions from Go Game HQ:

Hello, Agent Hotstuff!  Teams will be instructed to look for you and try out their best pick up line on you.  It’s possible they’ll have a little trouble locating you.  It’s fine if they hit on the wrong person a time or two, but if they’re struggling to find you/bothering patrons, give them some help locating you. Then they’ll try out their best pick up line you. Depending on how funny/cheesy/good the line is, you’ll give them a score to enter into their phones (and you pretend you’re giving it to them as part of your phone number). The scoring works like this:

You can always play around with them a little, too.  Ask for a better line, ask them to deliver it the way they would in a real bar, ask for the best line they’ve ever heard in their own lives, whatever you think will keep things lively.  Please remember this is a corporate event. Teams love this mission, and you’ll have a very good time today. However, on occasion, teams may push the boundaries of good taste with their pick up lines/moves. Please keep things comfortable at all times.

This is exactly what teams will see before they come to you:

Smooth Line: As superheroes, you need many different skill sets. And for this particular mission, you’ll need to showcase your skills in the ole pick up department. Why? Because it’s a lost art. So head on over to Local Color on Pike near Stewart.  There you’ll find the debonair Agent Hotpants. Approach gracefully and try out your team’s best pickup line. Make it as original as possible because he’s one smooth operator! Also, your line will be judged against other teams. If your line has enough “omph”, then our Agent just might give you his phone number. Hit ‘Prove’ once you’ve entered THE LAST FOUR DIGITS below.

I left Olympia with great expectations and a great underestimation of the time I’d be investing in parking and navigating the big city streets.  Five minutes past the scheduled rendez-vous at the Pike Place Starbucks I bit the proverbial bullet and invested $20.75 on a 3 hour parking spot beside the Lusty Lady.  I spotted my contact easily.  She wore an orange jumpsuit and sat at a table full of checks.  I took my pay and beat the pavement to my designated encounter zone.  While deciding where to arrange myself, a dude in a fez offered to share his table.  It was the Howlin’ Hobbit.

After I got my little green laptop fired up [11:58am], a waitress told me that I needed to buy something if I was going to use their table. OMG! No, no, I’m with the Go Game!  They told me to come here and people would maybe buy me a drink!  Do you have whipped cream? Oh, good. 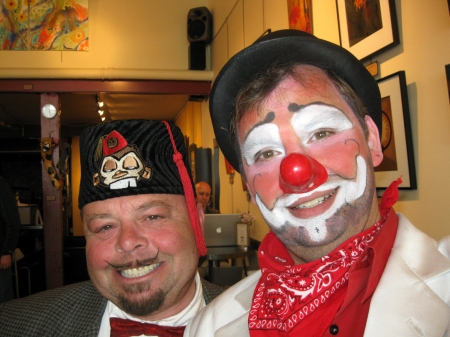 Six Ways to Pick Jusby Up

I would have loved to hear lines like these yesterday, but Go Game Teams seemed pressed for time and imagination. The first team arrived, and they elected a woman spokesperson.  She mumbled, “Can we buy you a drink and maybe get a room?” WTF?! Um, okay, I’ve been fascinated by that flashing neon sign advertising a Coconut Chai… 12 oz is fine.  Here’s my number [written on the back of my biz card] 3111.  I had no idea how the grading curve would play out.  I was told that 200 Microsoft employees in 25 teams would be playing this game over the course of 2 hours.  There were about 16 actors involved.  Each scenario took a couple of minutes to play out.  Although their pick-up was pretty awful, they were quick with the drink.  It was a long time until the next group arrived.

[1:37] Third team also sends a man.  He’s trying to keep it together, but his delivery is stumbling and the line isn’t working for me.  “Do you know you’re in the wrong place?  The Miss Universe Contract.. uh, Contest.. is down the street…” Yikes.  It’s about to be a crash and burn.  One of his team mates whispers that he should offer me a drink.  The line is long, and my chai isn’t empty, so I decline, but I keep him squirming.  I ask if he likes pie?  Of course, he says yes.  I have him fetch some whipped cream and pop him with a micro-pie on the nose, letting his team earn a 6111 for being a good sport and persistent. 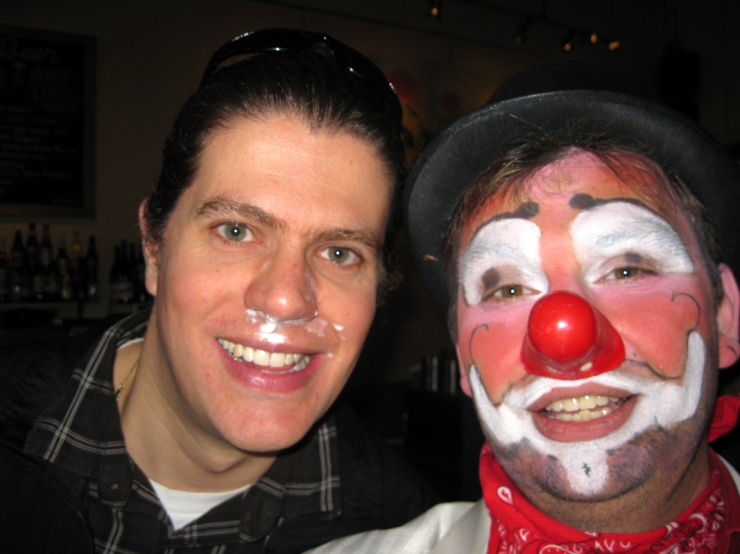 [1:46pm] The fourth (and final) team is at the door.  I’m getting the sense of when a team arrives without having to watch for them.  The energy shifts when 16 eyes scan the place and somebody suddenly hisses something like, “That guy! Check out the clown!  It’s gotta be him! Oh, no, what are we supposed to do?”  Then they all consult their smart phone for the instructions.  And laugh, embarrassed.

I’ve brought my fan, and I open it to signal them.  [1:51] I glance over, thinking they have definitely confirmed a spokesperson and decided on a line.

OMG! WTF?  Their spokesperson is sitting at the wrong table, picking up a civilian!  I SNAP open the fan, drawing some stares, hoping he’ll  get the clue to desist before it’s too late.

It’s too late.  They’re shaking hands like, “Good to meet you anyway.”  I cross over and ask the civilian, “Are you working? [no]  Did that dude just try to pick you up? [I think so] They’re looking for a sharp dresser,” I say, brushing the lapels of my tuxedo coat and touching the brim of my top hat, “and I think you won. Niiice.”  Then I go sit back down.

A minute later, the spokesperson shows up and asks, “Are you Agent HotPants?” YESSSSS… Very Good!

“What’s your policy on Manscaping? Old growth or scorched earth?”  LMAO [That’s what you asked the civilian?!]  Hmmm, I’m circus-scumscribed.  Here’s my#6111 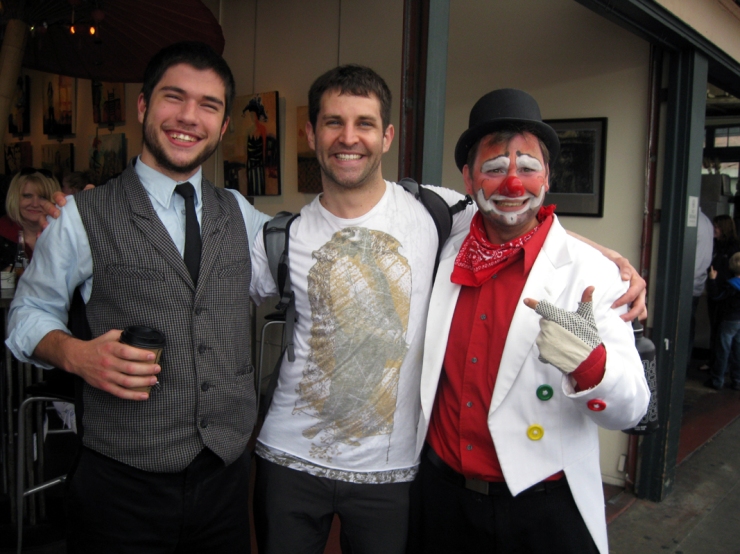 Christopher (middle) with civilian and the real Agent HotPants

Then I was cut free, so I packed up, but before I left the owner wanted my boss’s number.  He said, “I want to stop having you come in.  It’s nothing you did, but it’s a distraction and nobody buys anything.”  I wrote her number on the back of my card and got the heck out of  Dodge.  First, I made a quick photo-op with Sage, who got me involved in this silly scheme. 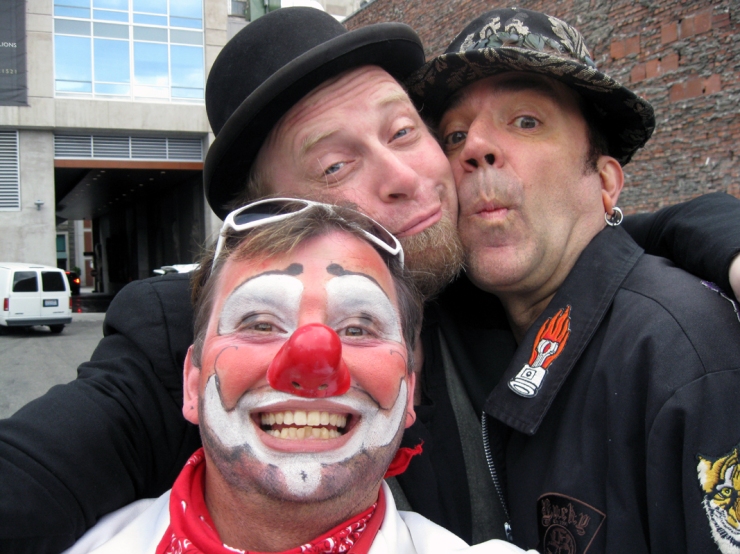 Sage, Etienne, and Jusby in the spendy parking lot

Then I hit Friday rush hour traffic all the way home.  9:45 Depart Olympia, 4:45 Return Olympia.  $65 Pay – $20.75 Parking & using up a Personal Day from work… not the best gig economically speaking… but that’s part of the rant you’ll find below the cut

9 Ways to Bring Jusby Down

I had the pleasure of participating in the Go Game on Friday.  I had signed up some time in 2010.  They confirmed me in this particular game several weeks ago.  At the conclusion of the game, you indicated that you did not want the game to continue in your store.  I think you’d be wasting a valuable opportunity, and I hope this reaches you when you are willing to be wrong and make some changes that might capitalize on what Go Game is doing.

Here’s what I did because I self-promote my whereabouts.  I tweeted: Seattle day-trip, playing GoGame w/200 Microsoft employees… rating their pickup lines at Local Color, PikePlaceMkt

I have 137 followers @jusbytheclown BUT I use a variety of other social media and my twitter stream feeds into those.  It feeds into my facebook.com/jusbytheclown profile AND there are 1160 friends there who see that.

Furthermore, I also posted a link to your store in one of six status updates about the game… posted LIVE updates during the game from your store… CREATED a fricking EVENT, personally inviting 137 Seattle area friends to your store… shot and posted pictures of your store.

All because I believed that you were on board with the Go Game.  I thought this was supposed to be fun, an immersive interactive experience.  It’s about role-playing and teamwork, right?

At no time during the game did I feel that I was occupying a table that should be available to a paying customer… oh, wait.  That one time at the beginning, when the gal behind the counter told me I should buy something if I was going to sit there.  This is where a communication gap between your establishment and the Go Game should be bridged.  They should let you know if a CLOWN is going to be freeloading on a particular day and what hours.  It was not my responsibility to identify myself as a character and ask permission to sit there.  Other than that, there were always tables available to paying customers.

Regarding the players as paying customers or potential customers… ~200 Microsoft employees were anticipated for this particular game.  Your store had 4 teams of 8.  Of those 32, one bought a 12 oz iced chai at my request.  Those teams now have positive brand recognition of your store.  Those teams took pictures of themselves with me in your store and have a reason to tell others about that experience.

Imagine a different scenario.  I am a brand ambassador for not only the Go Game, but for Local Color.  I am a salesman for Local Color.  When the team tries their pick-up line on me, I act thirsty when I am not actually thirsty.  I tell the server “My usual!” and she rings up 9 bottles of San Pelligrino (or something).  I give them a high score.  They have beverages.  You get the cash. Win here. Win there. Win-win everywhere.  Winning.

Imagine what would make me do that.  Respect, sense of play, a complimentary sandwich.  Something with chipotle.

Imagine if it had been your happy face posing for a photo-op with the award-winning, pie-ing-est clown in Cascadia.

I don’t know what the Go Game offered you.  It sounds like it might have been a nothing-burger of empty potential (“good exposure”).  Re-negotiate instead of cancelling.  Be known as someone who enjoys novelty, a little distraction, and live performance… put it on the schedule for crying out loud.  Above all, strive to achieve that fair balance of Show and Business.