Then “Honey” and I drove to Shelton for a Double Birthday, Double Clown Party.

This was the second big Hispanic community celebration.  In fact, the woman who called had been to the other one, which is a great referral and testament to strong community connection.

However, there are some disadvantages.  This time, they had no computer access for exchanging the paperwork (contract, invoice, etc) or further social connection (facebook, twitter, linked in).  Also I was again paid in cash, large bills, and I carried no small change, so they may have felt awkward tipping an additional five, but I wasn’t willing to work for $15 less than agreed upon, especially since I had subcontracted “Honey” to take photos, prep pies and paint faces.

I collected several PAGES of signatures for the pie-in-the-face, but when the time came around only THREE kids actually came forward.  The DJ was so loud that they probably didn’t hear.

No, they heard.  And it was translated too 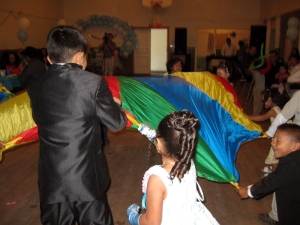 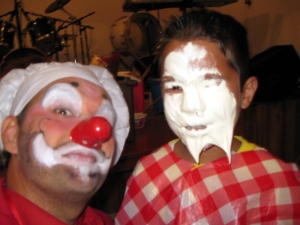 I later asked our Spanish teacher to help explain about the party.  I said, “I meant to ask you about something about Hispanic culture.”

“I’m a clown and I went to a party in Shelton.  Everyone signed up for the pie in the face, but only the kids actually came forward.”

“Okay, I’m not understanding something.  You are a cloud?“

“I think the music was too loud.  Even the gramas (the abuelas) making faces.”

“Jew know somfing, I was thinking that same thing when I was in Mexico, about my culture.  THEY ARE SO LOUD.  It is because they are shy and nobody has to talk to each other.”