I had ANOTHER new look for the job at the EF school!  I picked up this Referee’s shirt at Goodwill during soccer season, and I had intended to take it to Nita to make it more clowny.  All it really needed was an assortment of buttons, a wet bandanna, a stopwatch, and an extra loud sport’s whistle!  I’m not opposed to having some additional fringe or bells or whatnot added, but it’s not a gotta.

Also I was concerned about the near 100 degree heat.  Notice the thermometer in the background.  This was an authentic ref’s shirt that features a plastic lining that causes my perspiration to remain a coolant instead of soaking into the fabric.  It’s a most curious feeling, however, to be dry on the outside and swimming on the inside.  I recommend this type of shirt to any clown who works in the heat of summer, be it parade or outdoor festival or backyard birthday.  The ref’s shirt especially conveys some special authority with which you can TELL PEOPLE WHAT TO DO!  And they DO IT!

Which almost brings me to the pie-fest portion… first I did an abbreviated indoor show on the stage of the Lecture Hall, featuring an assortment of my usual tricks but also introducing my new baby Orangutan puppet for a mini-lesson on the Indonesian language.  [Orang-Utan means Person of the Jungle.  Orang-Utang means Person in Debt.  “Like You” sayeth the puppet]  All those who had signed the waiver were called up on stage and made to perform as a human machine.  Then we sat them down and showed them the Pie Delivery page of my website on the big screen.
Okay, let’s go outside for your prize.  Hmmm.  Many had changed their minds, or realized that they should not sign anything in this country without reading it first.

But a few brave souls stood up and took what was offered. 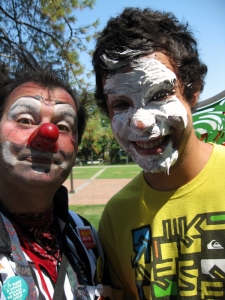 Then the idea caught on as they wanted to be in charge of the pie-ings. 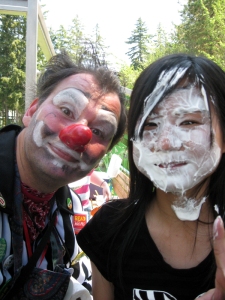 I still got to do a few…

Actually, no I didn’t personally deliver another pie that day.  I just had to stay out of their way and shout out cautions like:

When my cooler was completely empty and all my paper towels were gone, approximately 20 more faces had been pied.  I will take credit for administering and supervising all faces that get pied during my visits even if I did not personally deliver the pies.  I think that’s fair.  The law would probably hold me responsible.

Some pied peeps didn’t pose for the pic, but I feel secure in claiming the new total to be approximately 210 pied faces (up from 193).