but I was so happy to get a 2 hour Premium Visit booked that I called Honey the Clown to be my assistant and photographer. 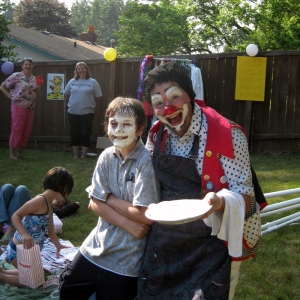 My first face!  He got the full length spiel.  We had a water fight toward the end of the party.  Him with a water pistol vs. me with squishy-fishes! 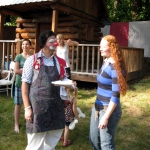 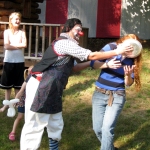 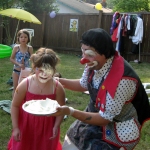 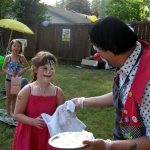 Birthday girl watches on while Makenzie takes a pie. 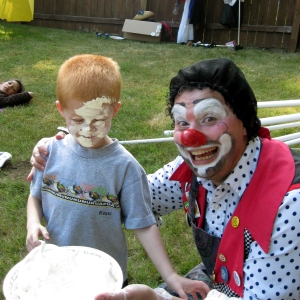 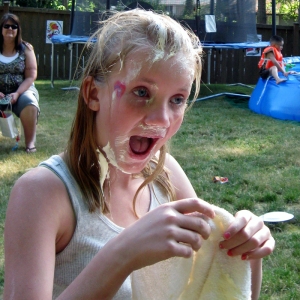 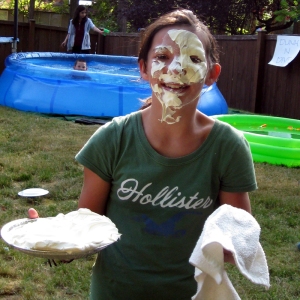 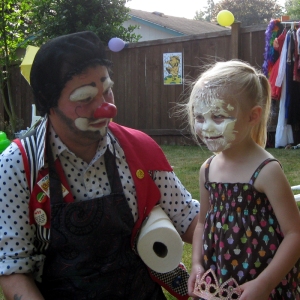 Sammy hung around ALOT.  She retrieved balloons and kept saying that I was So Funny!  I kept saying,

“I’ve worked hard to become so.” 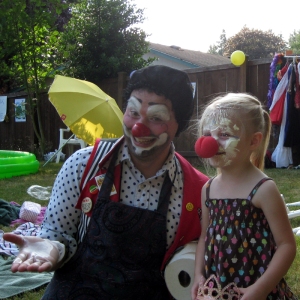 So she got a nose… and paper towels instead of a specially custom JUSBY PIED terry cloth model.

Then… I brought out the new dispenser… and it FAILED again!  Gas hissed out the side and, when dispensed, shot everywhere.  So I just splattered around toward adults.  We gave it to the birthday girl, and she wouldn’t put it in dad’s face.  Good girl! 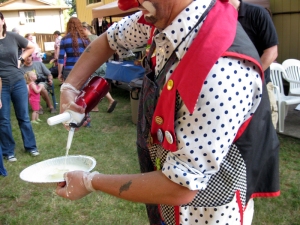 [at home I found the O-ring on the drying rack!  Well, it’s clean for tomorrow! LMAO What a Life!] 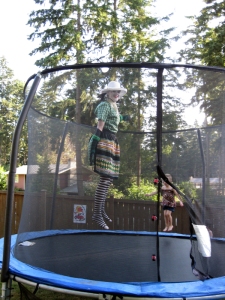 Then the water-balloons came out and I actually used the bucket of water… AS WATER.  Then the confetti! 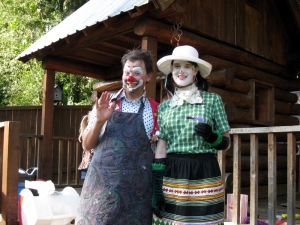 The Deck of the porch provided a marvelous stage!  I used the left, and Honey painted faces and bejeweled on the right.

In addition to the pie-ings, they had a giant back yard filled with activities including TWO pools and a Trampoline.  All around the perimeter were activities like Pop the Balloon with a Dart, Cardboard Bumper Cars, Ring Toss, Western Dress-Up Photo, a Hamburger/ Hot Dog Stand with Cotton Candy, Popcorn, Etc. Etc. Etc.!

Kids came up and started giving me tickets to ride the stilts!

I gave a few rides out and harassed a teenager who had one of two earbuds in his ears.  I asked what he was listening to and HE DIDN’T KNOW!  Later I caught him about to text.  I told him no texting!

I got the show started by pouring out the five or six little white plastic bottles in to the bucket so the fish could drink.  I ended with the not-so-little brown plastic jug.  “They drink like fish”, followed by “Little brown jug how I love thee!”  And of course a fish squirted me.  I made sure they were full at home.

And I kept repeating that I might need it during the juggling fire part.  [which I never did]

All concluded ahead of schedule and under budget!   Go team JUSB-HONEY!