“You know, we’ve been talking about this all year” ~ Tristen, at the end of his party.

Since Halloween, he and I HAD discussed the birthday party pie-ing details at least once a week, sometimes several times a day.  When the cost became a factor, he even used his accumulated allowance to make up the difference.  (and I adjusted the fee schedule accordingly!)

My assistant, Agent O, acquired the target and lured him to the rendez-vous spot.  Agent O was also in charge of the photography.

Tate was first to sign the waiver.  Boy, his expression changed when I read it to him!  He immediately crossed out his name.  Then his friends started signing up, and he jumped back on the band wagon with a vengeance.  He got a French Vanilla pie.

Joel took it like a champ, very subdued as always.

Kallie didn’t want to wash her face until her mom arrived.  She also got chocolate. 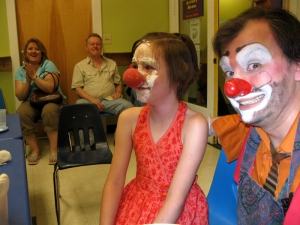 Josie got the Sugar Free version.

Tristen’s other school friends opted NOT to get the pie.  David and Daniel signed up, but crossed their names off after watching it happen.  Aidan and Cody just kept playing in the museum and missed the pie-ing altogether.  They showed up in time for cake though! 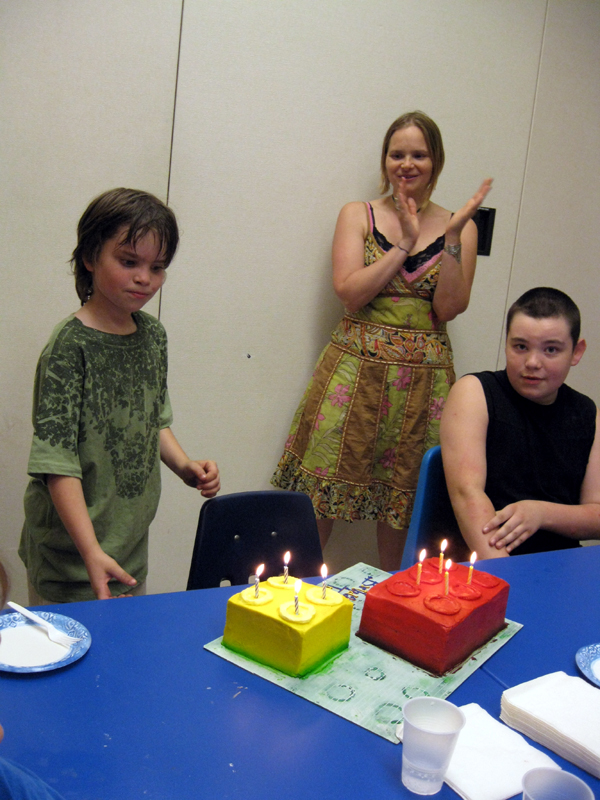 Note the Lego-ness of the cakes, courtesy a baker friend at Safeway!  Each cake has 4 bumps with a candle in each to celebrate turning eight.  The red was chocolate, the yellow was vanilla.  Dee-lish!  I had left over French Vanilla topping instead of ice cream on mine.

Note the matching orange shirts.  They were inspired by the Lego Agents sets.  The henchmen of Dr. Inferno wear prison orange.

I decided against marking the Inferno logo on our shirts with a Sharpie.  Maybe next time. 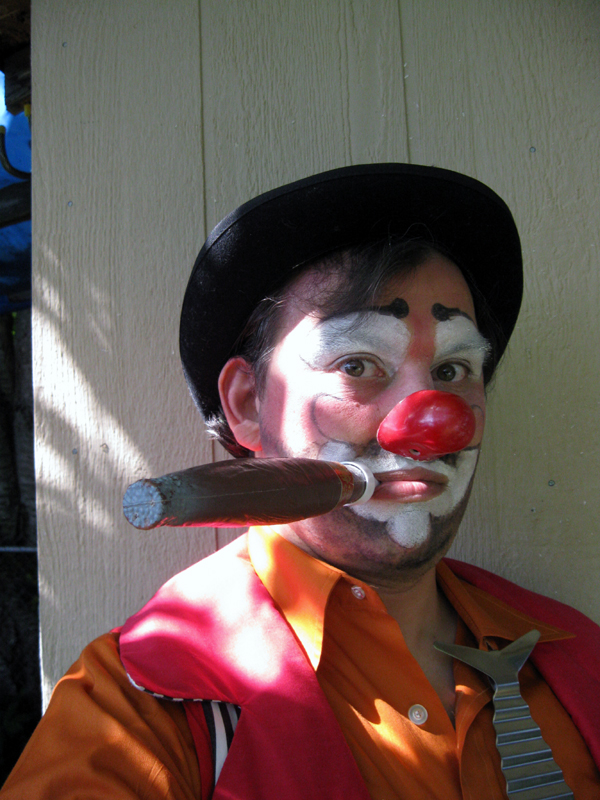 A few other thoughts… I am so pleased with the new sign and easel!  I needed some signage for the upcoming Enterprise for Equity showcase (June 2 at the Water Street Cafe), so I convinced Agent McIsaac of Pinch to design it and update my card.  It’s a 22.25″ x 36″, laminated and mounted on black foam core.  I rigged up an easel out of giant Tinker Toys and brought it to display outside of the room.  Quite a gimmick!

Also, I had an experience of synchronicity while getting the costume pieces together for the gig.  Orion and I went to the Westside Goodwill to browse, and we found his blue fedora.  We also found a Lego Agents set there for $8!  It was in its original box with a SALVAGE sticker on it, and I was reluctant to part with it as a gift for Tristen.  I rationalized that it might not have all the parts AND he might get that same set from a friend or family member, whereas Orion didn’t yet have ANY Lego Agents sets.

We’ve often looked at Goodwill or Value Village for Legos ever since I scored two loose Harry Potter sets one day.  We hadn’t found any until the Turbocar set showed up.  We’re keeping it in the box as an incentive for Orion to visit the dentist!

We decided that we could part with two of our vintage spacemen mini-figs as a gift.  We bagged up a red and a white, each with a gun and walky-talkie.

He did get that very set from someone else, in a brand new box!

We also gave him an issue of Lego club magazine, and I burned him a CD.

It included the following music:  [please, no suggestions as to what I forgot!  I download as fast as I can on P2P networks using dial-up, but I’m soon to upgrade with a wireless PCI card and share wi-fi with the neighbor]

END TRANSMISSION, THIS MESSAGE WILL SELF-REPLICATE THRU CYBERSPACE IN 3… 2…1