It was no surprise to me that when Duckhugger arrived at the party he’d brought his special Tarot deck. He’s been after me to play an ancient card game with them since ’06.

In place of the Fool, this deck has The Excuse, ‘an un-numbered card that in some variations excuses the player from following suit or playing a trump, and in others acts as the strongest trump.’

In the Italian this card was called “Individual Foolishness” while the one we know as “The World” is called “Collective Foolishness”. It features multiple clowns that become military troops in the reverse.

One day, Duckhugger called the Radio 8-Ball to ask about spreading this game. In a way I found it the ultimate irony: music and cards had switched places as oracle.

Once upon a time (about 10 years ago), listening to the music on the radio was simply for entertainment while looking for meaning in a random assortment of cards was serious business.

It got me to thinking about the origins of oracle. Perhaps it had always been just fun. Thinking back to the first shaman that decided to share his thoughts about the cracks in the shoulder bones of an ox.

“C’mere, check this out! It looks like it’s going to rain this spring! (hee hee hee)”

“Hey, everbody, check out what Jusby discovered! He can tell the future!” 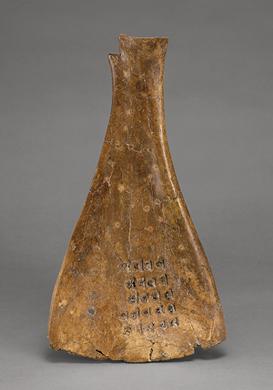 “Of course, first you gotta make some tea.  Then you gotta think of some crazy thing to say when you’re staring at the bottom of the empty cup.”

2 thoughts on “The Excuse”