As soon as he woke up, telling us “Hey, I turned four!”, we lit his candle and sang him the birthday song:

“Each of us rising from the Earth,

seeking love and wholeness from the moment of our birth, 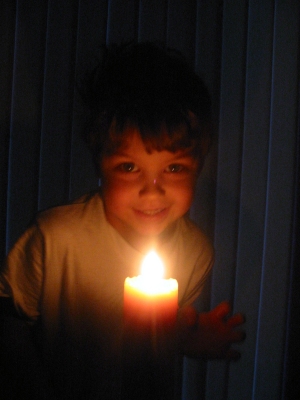 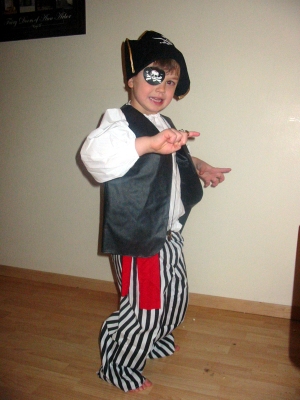 His new costume (From Wind Up Here)

He brought Lemon Poppy Seed muffins to school with him, half had raspberries too.

I went on a field trip to see Lazer Vaudeville, but my charge didn’t like it, and we left after 20 minutes. He said, “I don’t like shows with too much stuff!”

I’d been wanting to see the show for more than a year, and I loved the first 20 minutes. It had lots of black light puppetry, juggling, lasso tricks, and hat tricks. I’m inspired to learn more. It looks like the round topped bowler would actually be a better choice for hat tricks than the top hat. Also putting some color inside the hat makes sense if it’s going to be flying through the air.

After school we went to Farelli’s Wood Fire Pizza on Yelm Highway. He had a plain cheese pizza and a chocolate shake. He spent about a half an hour in the arcade section sans quarters “playing” games. Trish and I had the Wednesday special 12″ 2 toppings for $9.99, and each wanted different toppings on our half (spinach & sun dried tomatoes for her/ meatballs and sausage for me). Our server, Billy, said, “I’ll make it happen.” We also cashed in the gift certificate aunt Elaine in Mississippi had arranged with the manager over the phone. They don’t currently have certificates available on-line, but she made it happen!

Trish amused herself by keeping a secret from me. Some packages had arrived for me, but she wouldn’t tell me from whom. I guessed that one was the Conception Dollars and one was a card from SC [I recently fixed her website, saving her from a cease and desist order]. However, I was wrong on both counts. Remind me not to play poker with her.

It was two giant boxes of cookies from the East Coast. Our dear friend, Lisa, is planning to go into the custom cookie business, and she’d promised to send us some samples.

She’d asked what kind would Orion like. He replied, “Bubble gum”. She found some Bubble gum flavored jelly beans and mixed them into chocolate chip cookie dough.

I opened them and told him what they were and he flinched and turned away with an “Ewww!” The other cookies were “Choclate chip double peanutbutter swrill” [SIC]. They were delicious.

Then we watched Bee movie which had arrived via Netflix. Great message, totally appropriate for me looking for a way out of a typical hive job still.

Invitation to the Pirate Party