Mike Fritsch of Eastside Big Tom’s puts together Tumwater’s Halloween House each year. This year he posted a myspace bulletin asking for someone to wear some scary clown costumes. 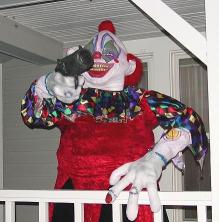 Jusby toyed with the idea, but decided it wouldn’t benefit the noble clown image nor business. He opted, instead, to go as himself and act as horror liaison/ tour guide.

For some guests he made the difference between anxiety attack and quick exit. For other guests he provided a manic escort straight to, “a really scary clown over here!” Which turned out to be… Jusby going, “Boo! Ah-ha-ha-ha! YOU SHOULD’VE SEEN YOUR FACE!”

Most of the time he said stuff like, “Oh, no, that guy’s just made out of chicken wire. Well, he does have some animatronic motion from a bunch of Robosapiens they modded together… [scary clown moves toward guests/ guests scream!] Ahhhh-ha-ha-ha! YOU SHOULD’VE SEEN YOUR FACE!”

One of the best things he heard that night was a guy telling his friends, “Well, I forgot about the stupid job for a few minutes.”

p.s. I could sure go for a Big Tom Burger with Tots… and what is that shake flavor of the month?