Because I constantly reminded the students of Ms. Lilly’s 2nd grade class that I was a clown… I was able to book this party months in advance!

Even though Kallie had been pied at Tristen’s party a few months ago, she was still keen on getting pied at her own birthday.  In fact, she wanted the whipped cream all through her hair and everywhere… going back for a second pie after every one had theirs.  She knew about the red clown nose I sometimes use and had a suitable substitute in the form of Groucho glasses! 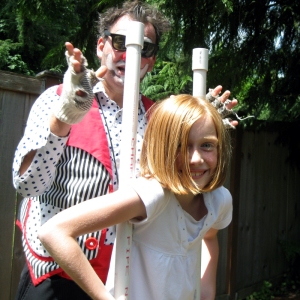 Exhausted from the ride, Jusby has a drink of water.

Isabelle got pied, but said “Not in my hair!” 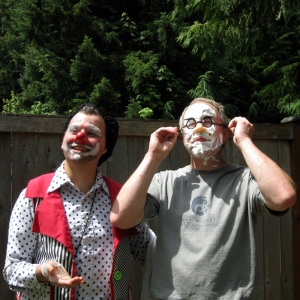 Roger signed the waier and then walked off, saying “See you.”  So we had to stalk him with a pie and convince him to come back.

He decided that Kallie’s mom should enjoy some of the sweetness too! 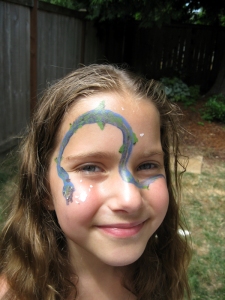 Isabelle asked for a Sea Serpent.  This one had a jewel in its mouth and a touch of glitter.

Tristen wanted Croc-man from Batman.  Loved using the mesh for the scales.

And since Kallie wanted a fish, I got to use it again.  I was somehow inspired to add the hook with a worm.

All in a day’s work!