I spent the afternoon with Luke shopping for the new flaming pie hardware.  We went to Home Depot for an hour.  Then we stopped at Ace Hardware for the white gas (aka Coleman fuel).  We walked to the dollar store and got cutting boards, red oven mitts, a red checkered tablecloth, and plums (for Orion).  Then we had to go back into Ace Hardware for more screws and washers to attach the boards and mitts where scrap lumber had been.

Luke handled all the drilling and screwing from that point.  They were done in time for me to rush down to the Midnight Sun and talk with Elizabeth Lord about the possibility of flaming pies in her upcoming Vaudeville show.

What was expected was “an audition”.

Two groups were before my conversation.  A couple did a drag Mary Poppins / Chimney Sweep lipsynch and dance.  I wasn’t familiar with the version, but it took aim, in part, at Disney.  Then the woman had another partner do a Flamenco duet.

I told Elizabeth frankly that my new flaming pie act had never been tried, but I proposed a Clown-lesque act of approximately 5 minutes.  If I felt I could not safely perform flaming pies indoors I was willing to work outside, perhaps during intermission.  I was sure to light them up later that evening.  We would be in touch.

Here they are soaking in white gas.  Neighbor Aaron advised, after the fact, mixing the white gas with paraffin lamp fuel, to lower the flash point and mellow it out overall.

A fully soaked pie.  Aaron also demonstrated how it is wise to shake off the excess fuel… before lighting it.

They lit up good!

So I did a little dance. 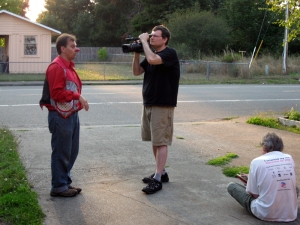 Then I consented to an interview with David Raffin.