I did my first double pieing the other night.

It was at the birthday of a twin, a gemini, but I didn’t pie her and her twin brother.  I pied two girls who are dating, and they are both named Erin.

Mauren and her twin brother turned 33 (another symmetrical synchronicity!), and she decided to announce her party on #fcbk.  Since she didn’t have a computer with internet at her house, creating the invitation fell to me.  Since she had decided on a Circus theme I felt morally obligated to make the scene.

I convinced Heather “Honey” Duke to accompany me and assist with principal photography. heh. 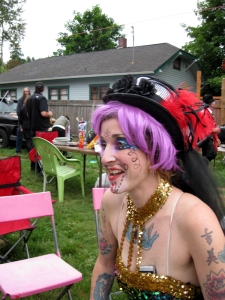 The birthday girl now sees all, and tells nothing.  We gotta get her a red nose and clown character though, so she can start participating in the RNB alley events. 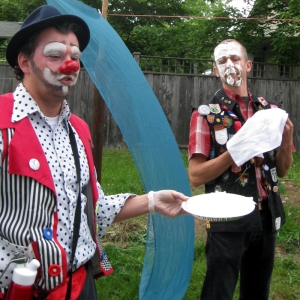 “Blaireau” did a great set with a street organ.  He’s an actual French “organ grinder”. 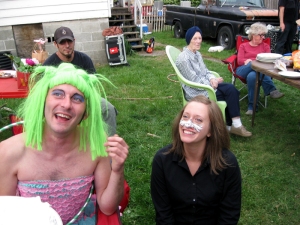 This fellow wanted eyes like Siouxsie Sue.  Sarah got a white dragon across the nose.  How could I have forgotten to take a picture of the Temple kid who got a blue dragon?! 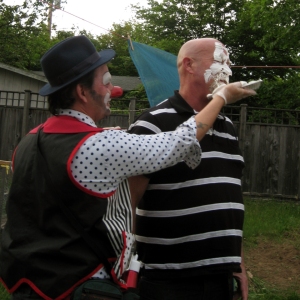 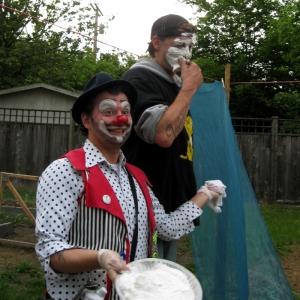 Glen had some great “chicken scratches” from prison.

The King of Olympia (in yellow pants) tried to pie me at one point, but I fended him off with my superior Clown Fu. 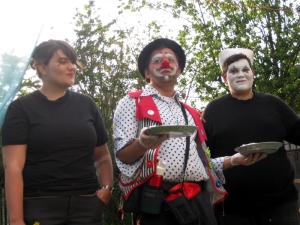 The two Erins.  My first time doing a double shot. 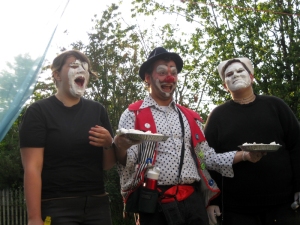 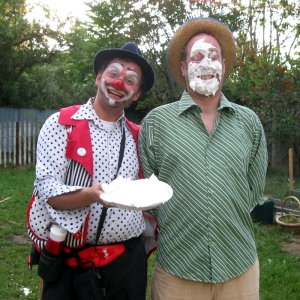 Bil Fleming finally got his pie… a year in the making.

Before it got dark I got to show off my fan flipping to a beautifully costumed Dutch-Indo family.  Who, of course, I didn’t get any pictures of…  nor the other clowns!  nor the half dozen weiner dogs in cute costumes!  Oh, I was preoccupied.  With pie-ing!  Here’s ANOTHER double shot!  Two men, one young and one not.

Tim “Big Mouth” the Ringmaster waited until sunset until he felt ready.  Then the Little Prince seemed to want to get it too.

My second double shot EVER.  Appropriate for the birthday party of a Gemini Twin.

Then the King set up a video projector and we watched UHF and Shakes the Clown projected on the side of Maureen’s house.  Until the cops came.

Here was the epic fail of the night.  After a flurry of twittering about inaugurating the new Organic pie-in-the-faces with a red 1/2 pint whipped cream dispenser delivered fast and cheap from e-bay…. it didn’t work.

The busted rubber gasket in my brand new whipped cream dispenser from e-bay.  I wasted the first two NO2 cartridges before I realized it wasn’t keeping a seal.  Sprayed Horizon Organic Heavy Cream and Agave syrup all over the dining room and Trish’s homework!  The seller said “I don’t have spare parts.  Call the company!”

The company website lists a spare gasket for $3, but they’re asking for $7 in shipping and handling.  That would bring the total up where it would’ve been if I had bought the thing from Fred Meyer or the mall, but they didn’t have RED.

I’m checking locally with Espresso Parts to see if their gaskets are compatible.  And I’m geeked to collaborate with them on a Barista Clown idea.

Absconded with Chuck’s hat at the end of the night.  I’m keeping it hostage until my missing lucky spatula is found.