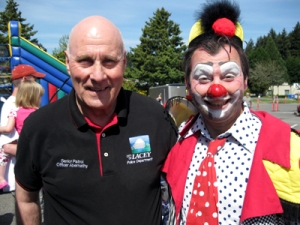 With my old friend, Officer Abernethy of the LSP (Lacey Senior Patrol).  I said he was OLD!  He’s a former WRC (Washington Reading Corps) tutor that I recruited for Lacey Elementary when I was an AmeriCorps*VISTA in 2001! 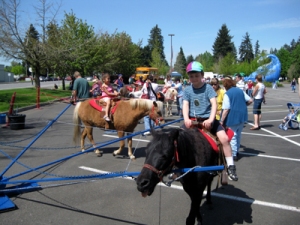 Jusby and Honey riding the Circus Train (notice the Train Theme continuing?).  We had to sit in the CAGE CAR!  Probably since Honey had Hedwig the owl. 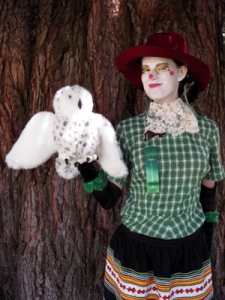 She first  met Hedwig at the Seattle Value Village.  He cost only 50c because he was slightly pinkish.  Orion and I first met Hedwig whilst bartering with Honey over some great make-up and accessories.  He was drying off in her bathtub and clean as ever!  He’s actually a Folkmannis puppet.  He’s got a reticulated head, and Honey did some marvelous Socratic dialogues with the children she encountered.

After we leave Lacey, we’re hungry, so I suggest drive-thru.  Orion agrees.  We head for the Eastside Big Tom’s, of course.

They’re slammed with a lunch rush that doesn’t quit.  People are also enjoying the new patio.  I pull into a parking spot and get instant window service.  I order small tots.  Then I call Mike Fritsch on his cell to see if he’s got any whipped cream… maybe I could squeeze in a pie-ing today.  He’s way to busy to consider that.  Instead of change back, the waitress returns my money and says, “Happy Clown Day from Mike!”
So I decide I’ve definitely got to get out of the car and find the guy for a photo-op.  I weave in and out of cars and wave at traffic.  Then I hear my waitress telling him, “Your clown is wandering around outside.”  He replies, “Here’s his tots!”  I beckon him over to the window so I can take a pic with him. “You’re crazy, man!” he says.

At the freshly repainted Eastside Big Tom’s bartering tots for a publicity shot! 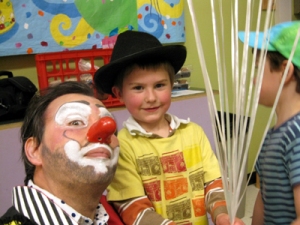 At the Hands on Children’s Museum, crashing Carbon’s 6th birthday for lemonade and fried chicken.

Carbon collected all the helium balloons and wants to recreate the new Pixar movie, UP!

1 thought on “Lacey Spring Fun Fair and Beyond”