Food & libations will be provided

You are requested to provide the music, jokes, stories, and ?

Money will be given away.

I offered him a pie-in-the-face, and he agreed. One one condition:

“I hope you could do the pie thing close to 8, so I have time to clean up whatever mess is made without disrupting the party” NO PROBLEM

Since he was providing food, he especially wanted to get firm RSVPs. In fact, he sent such a flurry of e-mails concerning the details that I completely mistook the urgency of the message and showed up on Sunday, August 31st instead of Sunday, September 21st!

It was a two-digit Sunday that ended in a one!

With Trish and Orion in tow, we pulled up to Traditions near 8 PM and found the doors locked and the lights off. I asked her, “Isn’t it the 21st? The International Day of Peace?” She said, “It’s the THIRTY-FIRST.”

By the time Terry’s actual party rolled around, Trish and Orion had made other plans. It was Gavin’s 5th birthday (at a bowling alley), and Trish had her GRE study class.

I got a ride from Tony, one of Terry’s son from Kelso. He’s a server at Red Lobster. He drives a Red Truck.

Terry had assigned seats. I sat down and opened up my face paints. My first customer was Kallie. Then she played a great set before leaving to play with her band Deaf Lester at Plenty. (Food and all that) 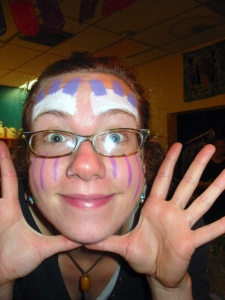 When it looked light the night was coming to a close I ran up and did a short act that included Indonesian cultural heritage material.

As I was introducing the idea of the pie as innocence, a blank slate, new beginning, etc. I was gesturing with the empty pie shell out the windows, and my phone rang.

Without even pausing, I answered, “Oh, nothing much… I’m JUST IN THE MIDDLE OF MY ACT!”

It was Trish, parked across the street, directly where I’d been gesturing. Orion had fallen asleep in the car. I put her on the speaker-phone everyone in the audience could say HI.

Okay, okay, do the pie and come home, right. I exited, stage left and filled the shell with whipped topping.

Terry told a joke about a bible-salesman with a speech impediment, and then I let him have it. 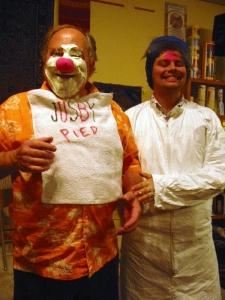 Terry Zander and Jusby in Tyvek with Face Shield

Did he give away money?  He gave away Lotto tickets.  When those were gone, he gave out dollar bills.