I called in to Radio 8-Ball to ask what my theme song for this next year would be. Andras had 8 stacks of disks. I chose #4 for the 4th month, April. I must’ve been looking for something square.

I got an instrumental song, “Sweet Nothing”, the last track of “Nothing Sweet Nothing” by Kym Tuvim.. with a clarinet that reminded me of my old roommate who’s in jail now.

Andras: It was very light and optimistic. Very springy. Because there were no lyrics maybe you’ll become a mime.

My iaudio mp3 player didn’t catch it, again, although I had a fresh battery and plenty of room. Two tech glitches in a day. Is Mercury retrograde again? 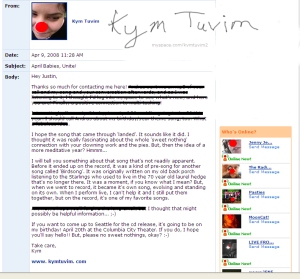 Thanks so much for contacting me here!

…I hope the song that came through ‘landed’. It sounds like it did. I thought it was really fascinating about the whole ‘sweet nothing’ connection with your clowning work and the pies. But, then the idea of a more meditative year? Hmmm…

I will tell you something about that song that’s not readily apparent. Before it ended up on the record, it was a kind of pre-song for another song called ‘Birdsong’. It was originally written on my old back porch listening to the Starlings who used to live in the 70 year old laurel hedge that’s no longer there. It was a moment, if you know what I mean? But, when we went to record, it became it’s own song, evolving and standing on its own. When I perform live, I can’t help it and I still put them together, but on the record, it’s one of my favorite songs.

If you want to come up to Seattle for the cd release, it’s going to be on my birthday! April 20th at the Columbia City Theater. If you do, I hope you’ll say hello!! But, please no sweet nothings, okay? :-)